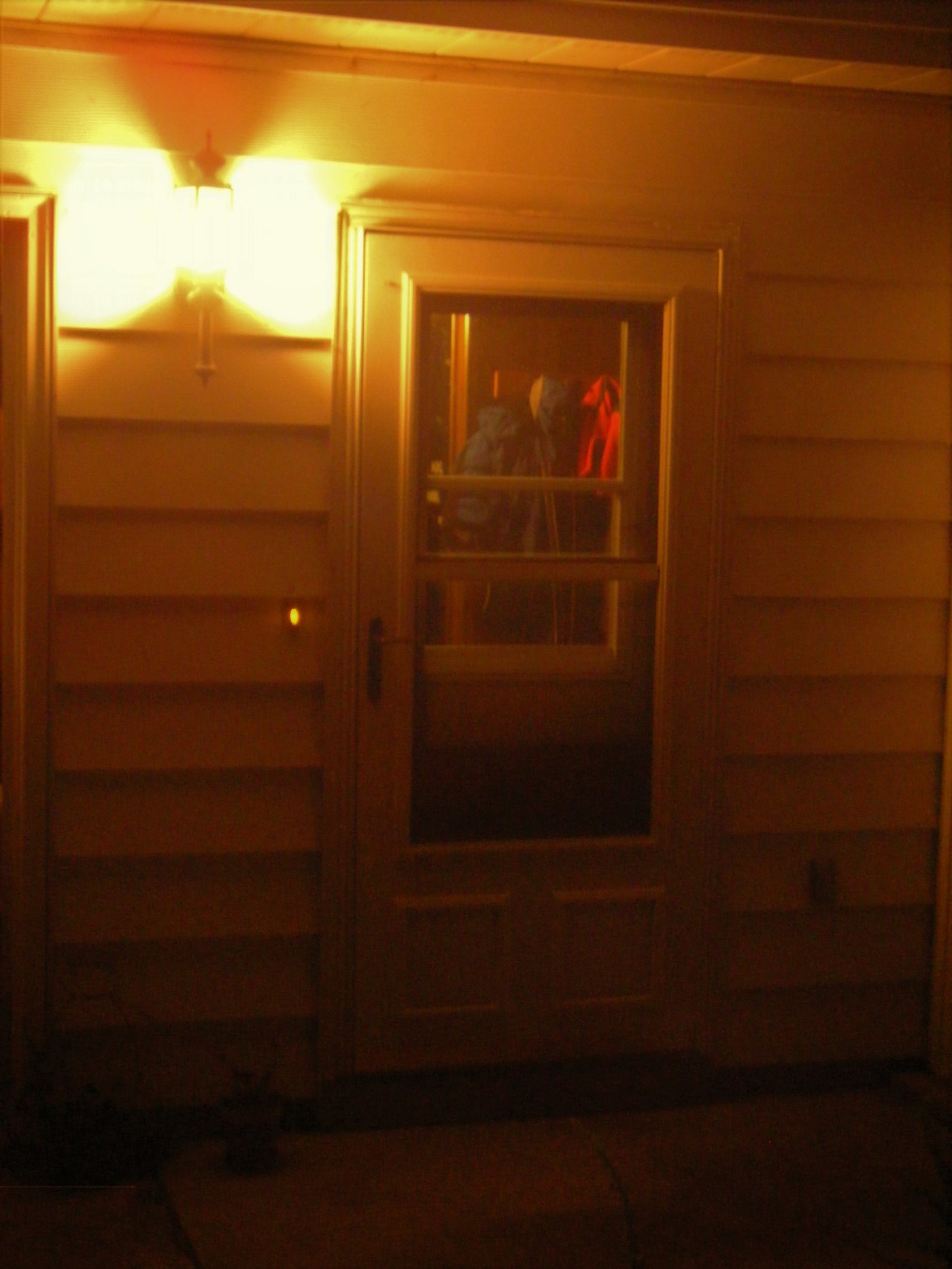 I saw him, his face gaping on the inside of the door.  On the inside of the door, he looked out, his jaw hanging down like he was trying to swallow a world of screams – awful.  Yawning in an unending exhaustion.  Agape in the terror that will forever precede the resolution that doesn’t come.  Ajar like a door that opened only onto blackness.

I saw him, his face agape on the inside of the door, painted in a dull yellow from the bulb in that part of the downstairs hallway.  I left the garbage cans behind me and was coming back now with my hands swinging by my side, cracked knuckles slimed with old chicken placentas that had been beaten and then discarded a week ago when an omelet would have taken too much time on the kids’ way out to catch the bus.

My hands, dry-cracked-and-egg-slimy, swung by my side and I walked with deep breaths to take in the cool of the night and leave behind the confusion of the house.  I walked and there, where the driveway disappeared into the shadow of the garage, he stood in the door with the yellow light washing over him, his face like a worn leather bag with his puckered, dried eyes rolled up into his head and his mouth hanging open trying to swallow all the things that he hungered for but was too slow to catch.

And who knows what those things were?  I thought of all the things that he could be trying to snap and then gnaw between the nubby few teeth he had left.  I thought that maybe he wanted youth or at least some semblance of life-energy.  Was he hanging there on a coat hanger jabbed like a meat-hook in his back?  Maybe he waited for a warm body to try to wrestle out of it its vitality and promise and hope.  Or maybe I was thinking too deeply and all he wanted was meat – a warm, bloody slab that was fresh, tender, and fatty between his teeth.

The sky was darkening.  The sun was gone, the night coming quickly.  The stars would come out and scrawl across the sky, marking their paths in well-practiced dance with Orion chasing the crab and the bears lumbering one after the other.  If I left a camera on a tripod, I could document the motion as starlight finely streaked across midnight.  If I left a camera on a tripod.  If I could make it inside to wash my hands.  And then find the camera.  And then find the battery charged.  And then dig up the 6-inch tripod I bought on Amazon for $12.  And then sneak back outside to find a place that would not be disrupted for 12 hours.

The dark was coming quickly and I still walked back to the house with my hands, cracked, gloved in thin egg whites.

I walked toward the house and still the thing hung his head back with his jaw dangling down in the stillness of the bulb burning in the hallway.  As I got closer to the door, I thought less of the thing on the other side and more about the flow of light – the way it cascades like water in undulous, radiative motion.  The way it comes, brilliant, from a source, and spreads like the rays of the Sun King’s crest – a halo of crespuscular rays.  It flows like water and moves out through glass so that on the inside, all a viewer sees is the light cascading all around him, shining off of the window and splashing back at the eye.  But on the outside, the light can be seen spilling out from the portal, warming the concrete and the dewy grass until, farther off, the trees and night fields swallow it up in their hunger for the scant flood.

I walk closer to the door.  The breeze cools the egg on my fingers.  I see the thing clearly now, drawing close in my field of view as I come up to the door, the bulb burning, burning too bright.  It burns and the yellow suddenly flares to a tallowed white and then pops with the intensity into blackness.  I reach for the knob and, with the stars staring in their stillness behind me, I see my own face in the window.  Tired, stretched thin, lips drawn tight against the work left to do.  I see myself.  I knead my forehead with egged fingers.  And then I open the door and grope my way back to the workroom where the spare bulbs are tucked in a drawer.

from the collection of: m. gantee